Women And Poetry.
There has been lots of documentation already written about RAID storages, why this one more you can ask. Alright, I want to write it clear, creatively and comprehensive for all whoever wants to understand how RAID works.
In the 1990’s there was a cult TV show “Twin Peaks”. Beautiful girls handsome men, beautiful Laura Palmer, FBI agent Cooper dreamt of by many women. Good and evil in a small town Twin Peaks.
In the second season of the show an evil genius Windom Earle emmerges. A former FBI agent and coleague of agent Cooper.
Windom was a great chess player and a proficient expert in poetry. He writes a poem by Percy Shalley on a sheet of paper, stripes the sheet in three parts and sends the each to the three Queens of Twin Peaks.


Season 2, part 16.
None of the girls could read the poem until they had met in the Roadhouse and put all the three stripes together. Only then they could read it.


“RAID 0”.
If we ilustrate “RAID 0” in a table these three stripes of the poem would look the following way.


Technically speaking “RAID 0” rrequires at least two disks, in our case we have three, since the girls were three. “RAID 0” is block oriented, i.d. it reads/writes in blocks. 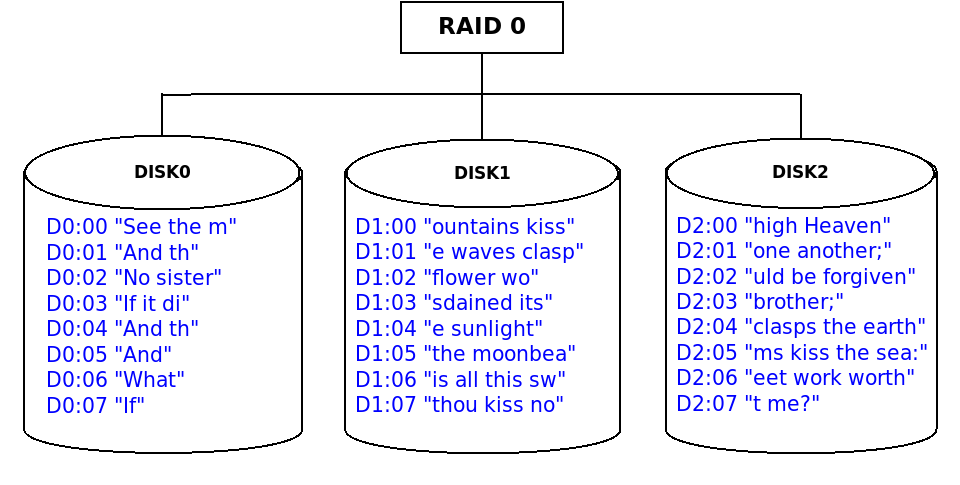 “RAID 0” has an excellent performance as the data is striped in blocks evenly, and thus with the three disks each of the disks has thrice less input/output operations, the speed is thrice higher as well. By organizing a “RAID 0” array of three physical disks you can approach the speeds of an SSD (Solid-State Drive), since the reads are performed simultaneously from all the drives of the arrays. So if one HDD can output 25mb per second, the three disks will output 75 logical mega bytes per second. In fact “RAID 0” is fastest of all arrays.

“RAID 0” has NO redundancy, has NO mirroring, has NO parity. “RAID 0” just simply evenly divides the input/output load between the available disks in the array.

“RAID 0” is highly UNrecommended for usage on critical systems where the storage reliability is of the utmost importance! As soon as any single disk is broken — all the data are lost with no single chance to recover at all. You won’t be able to read from the other healthy disks, for the data would be considered inconsistent without a broken disk of the array.
Just the same way as none of the girls could read the poem without two others, as well as any two girls would be unable to read the poem without any third of them.

The total storage space is the sum of all the disks. If you have three disks 1TB each, so you have 3TB for storage.
In the "RAID 0" the data are written on the disks as lined up stripes, it means that if you use the disks of different sizes in the array, say, 500GB, 1TB, 750GB - then the size of the array will be 1.5TB. That is the smallest disk will be multiplied by three, thus 500GB of the 1TB disk and 250GB of the 750GB disk will be wasted.

“RAID 1”.
“RAID 1” also requires two disks minimum. “RAID 1” is block oriented, i.d. it reads/writes in blocks. The blocks are mirrored. The redundancy is excellent, NO striping, NO parity. “RAID 1” maintais duplicate sets of all data on each disk of the array and represents them as one logical set of data.

The performance is good, but not excellent like for “RAID 0”. In fact “RAID 1” was designed rather for protection from data loss and redundancy than for speed and performance. Actually the disks in the array keep the identical copy of the data. When a write “operation” is performed it is done on the first disk and then the copy is written on the rest of the disks in the array. A “read” operation is satisfied by data delivery from any of the disk OR from all of them simultaneously as in “RAID 0”. 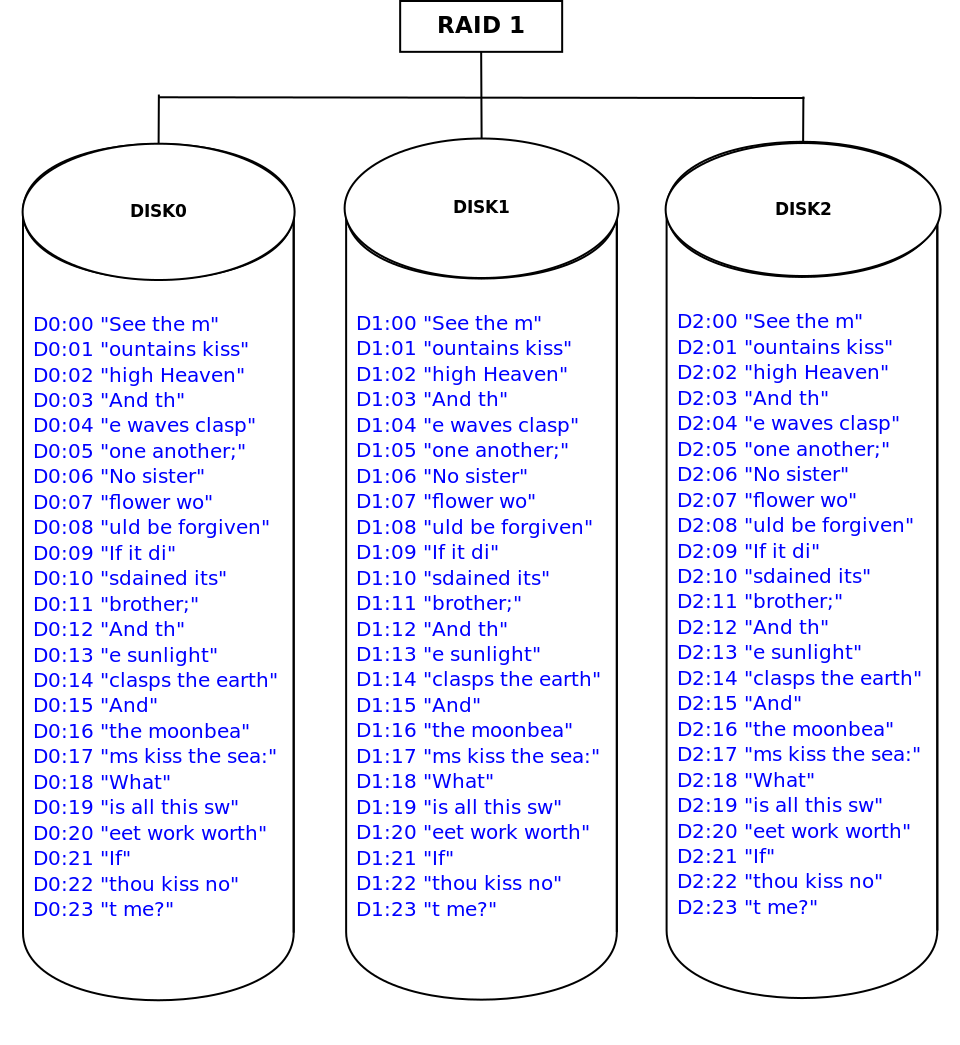 “RAID 1+0”.
A "RAID 1+0" array is implemented as "RAID 0", whose elements are "RAID 1". It combines the same advantages of "RAID 0" (speed) and "RAID 1" (safety), but in different way. "RAID 1+0" creates a large stripe of small mirrors. After failure of a disk, while it is being replaced, only the small fragment of a whole array is rebuilt.
The drawback is the same as of "RAID 0+1" - high cost of implementation.

Blocks, Bytes And Bits.
Above I showed you just a poetical representation of “RAID 0”, but before I continue to "RAID 5" I need to go a little deeper into technical details — about blocks, bytes and bits. Poetry will always stay with us, but we have to consider some technicals beyond the poetry, whatever - you cannot avoid it.

The data on the disks are well structured for quick access, the units on the disk where the data are stored are called blocks. Disks write information in blocks. Imagine that a page of your exercise book is a disk block. Each square is a byte. A byte is just a symbol, for example letter "S" is a byte represented in machine binary codes as "01010011", where those "zeros" and "ones" are bits.
So the letter "S" is a byte, represented with eight bits in binary code.
An invisible symbol "[SPACE]" in binary representation looks like: "00100000". Another "invisible" symbol "[new line]" (it looks like "\n") is "00001010", and so on...
Below is an exercise book page - just a clean disk block with no data. 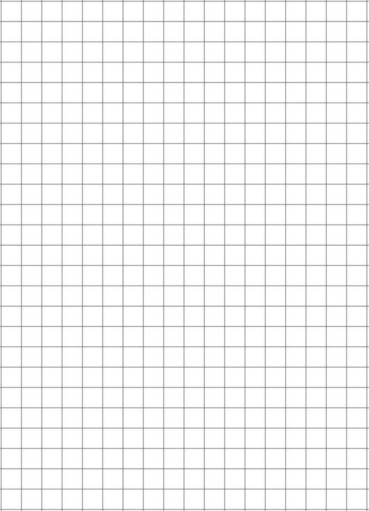 When you create a new file and save it on the disk the system creates a symbolic link (file name) and connects it with the address of the block on the disk where the data of the file are actually stored.